My goal this year is to read 100 books. Currently, I’m at seventeen. I actually think I’m a little over that since I’ve read some unpublished works and there are a few books I did not finish (DNF). But there is nothing wrong with lofty goal and I’ll just continue it on to 2019 if I don’t conquer it this year.

Here are the last two books I’ve finished reading thus far. I’m putting these up in no particular order. Just counting up to one hundred!!!  At my current pace, I should hit my goal roughly 2021…

“Sophie has the great misfortune of being the eldest of three daughters, destined to fail miserably should she ever leave home to seek her fate. But when she unwittingly attracts the ire of the Witch of the Waste, Sophie finds herself under a horrid spell that transforms her into an old lady. Her only chance at breaking it lies in the ever-moving castle in the hills: the Wizard Howl’s castle. To untangle the enchantment, Sophie must handle the heartless Howl, strike a bargain with a fire demon, and meet the Witch of the Waste head-on. Along the way, she discovers that there’s far more to Howl—and herself—than first meets the eye”  – Goodreads description

Howl’s Moving Castle was also made into an anime by Hayao Miyazaki. The movie is a bit different from to book, but both had moving castles…and were cool. 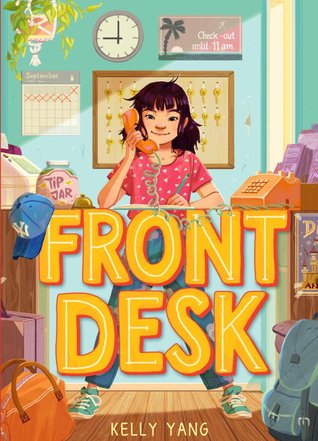 “Front Desk tells the story of 10-year-old Mia Tang. Every day, Mia manages the front desk of the Calivista Motel while her parents clean the rooms. She’s proud of her job. She loves the guests and treats them like family. When one of the guests gets into trouble with the police, it shakes Mia to her core. Her parents, meanwhile, hide immigrants in the empty rooms at night. If the mean motel owner Mr. Yao finds out, they’ll be doomed!”
– Goodreads description

This was another great book! The author immigrated from China as a child and her family managed hotels while she was growing up. The author’s note explains how many parts of the story were inspired by parts of her life.

← Kidlitcon 2017 with the KidLitosphere in Hershey, PA this Friday and Saturday!
#KidsNeedMentors →

This site uses Akismet to reduce spam. Learn how your comment data is processed.